Chiro.Org is proud to support Logan College and the ICPA for their continuous research into the health benefits of chiropractic care.   Please offer them your financial support.

. Like the title of this article. Does it serve the public, or any professional group, to use yellow-journalism tactics to promote their biased opinions? I don't think so.


I present for your review an abstract from the Journal of Neurology.

This abstract blatantly conceals (DISTORTS) the facts stated clearly, within the body of the paper, when it claims that:

“we describe 36 patients with vertebral artery dissections
and prior chiropractic neck manipulation”.

When I read that sentence, I am being led (by the author) to believe that “real-live chiropractors” (meaning licensed Doctors of Chiropractic, who received their training at a CCE/WCCE accredited schools) were the ones to provide the “chiropractic neck manipulation”.

Unfortunately, that couldn't be further from the truth!


The problem is that Germany has weak regulation of a class of health care providers called “Heilpraktikers”. They are a type of health practitioners with some or no formal training. The only thing that “qualifies” them is the fact that they have passed a written and an oral exam on general medicine. This test is not easy, but it can be passed if you are smart enough to read up on things and store some information in your head. The important point here is that there is NO requirement of formal training. Some Heilpraktiker in Germany call themselves chiropractors with impunity.

Another group that provides spinal manipulation is called “Chirotherapists. They are medical doctors who did a formal training on what they call “chirotherapy”. Those courses vary in length but generally take several hundred hours. The important point here is that all these groups claim to provide “chiropractic care”. There is no protection from the fraudulent use of that term by any provider. A Board member of the German Chiropractic Association provided us with this information.

The World Health Organization guidelines indicate that a medical graduate should a require an additional minimum of 1800 class hours, including 1000 hours of supervised clinical training, before claiming to offer chiropractic services. [ 1 ]

So, the first problem is that Germany does not regulate (and protect) the practice of chiropractic, or those citizens who are injured by poorly trained Heilpraktikers and Chirotherapists.

The next issue is the shoddy (or biased) construction of the abstract of this article. As has been demonstrated before by Terrett [ 2 ], abstracts are frequently the only source used for gathering information, and the “Misuse of the Literature by Medical Authors in Discussing Spinal Manipulative Therapy Injury” is rampant.

He documented that the words “chiropractic” and “chiropractor” commonly appear in the literature to describe SMT, or practitioner of SMT, in association with iatrogenic complications, regardless of the presence or absence of professional training of the practitioner involved.   The most recent article on this topic, by Adrian B Wenban is titled Inappropriate Use of the title Chiropractor and term Chiropractic Manipulation in the Peer-reviewed Biomedical Literature.

This article also contains incontrovertible proof that medical doctors (GPs), physical therapists, orthopedic surgeons, homeopaths, and medical neurologists should NOT use spinal manipulation on their patients.   Interested in knowing why???

The following table from the full-text study reveals who actually provided the “chiropractic neck manipulation(s)” that resulted in strokes:

Unfortunately, they provide no information on the percentage of SMT provided by each group. In The US it has been demonstrated that over 90% of all SMT is provided by licensed Doctors of Chiropractic. [ 3 ] It is suggested within the article that Orthopedic Surgeons do most of the SMT in Germany, but the authors fail to provide any statistics. Data from the RAND Corporation suggests the rate of vertebrobasilar accident or other complications (cord compression, fracture, or hematoma) to be 1.46 per million manipulations, with the rates of serious complications and death from cervical spine manipulation estimated to be 0.64 and 0.27 per million manipulations, respectively. [ 4 ] Even lower morbidity rates have been reported. [ 5 ]

Please, review for yourself the inaccuracy of this abstract, remembering that the body of the report notes that only 11% of the reported cases are associated with care from “Chiropractors”.   It is unsettling to imagine that even these facts (were they actually DCs trained at CCE/ECCE accredited schools?) are unsubstantiated.   Meditate on their choice of Keywords.   I hope you will find this of interest.   If you have questions, the principal author's e-mail address is uwe.reuter@charite.de

Vertebral artery dissection (VAD) has been observed in association with chirotherapy of the neck. However, most publications describe only single case reports or a small number of cases. We analyzed data from neurological departments at university hospitals in Germany over a three year period of time of subjects with vertebral artery dissections associated with chiropractic neck manipulation. We conducted a countrywide survey at neurological departments of all medical schools to identify patients with VAD after chirotherapy followed by a standardized questionnaire for each patient. 36 patients (mean age 40 + 11 years) with VAD were identified in 13 neurological departments. Clinical symptoms consistent with VAD started in 55% of patients within 12 hours after neck manipulation. Diagnosis of VAD was established in most cases using digital subtraction angiography (DSA), magnetic resonance angiography (MRA) or duplex sonography. 90% of patients admitted to hospital showed focal neurological deficits and among these 11 % had a reduced level of consciousness. 50% of subjects were discharged after 20 +/- 14 hospital days with focal neurological deficits, 1 patient died and 1 was in a persistent vegetative state. Risk factors associated with artery dissections (e. g. fibromuscular dysplasia) were present in only 25% of subjects. In summary, we describe the clinical pattern of 36 patients with vertebral artery dissections and prior chiropractic neck manipulation.

Care to Read the Full-Text article? 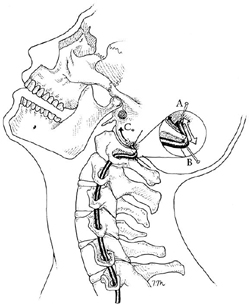 Return to STROKE AND CHIROPRACTIC

Return to SAFETY OF CHIROPRACTIC